Spruce commonly serves as structural lumber and has a long history of use in log homes. While resistance to decay is relatively low, the wood is light in weight and easily worked; an exterior stain is highly recommended to maintain durability.

Engelmann Spruce, as compared to other spruce varieties, ranks comparatively high in freedom from warping and paint-holding ability and has low-shrinkage characteristics. This species has a relatively small amount of heartwood and is generally straight-grained and can be readily air dried. Although this spruce can be used for many parts of a house, it is used extensively in common boards, dimension and framing.

Considered one of the whitest softwoods, better grades of Engelmann are used for interior wall paneling and other types of finish. Because of the low resin content the wood takes colorless finishes very well. Some other uses for spruce are the manufacture of veneer, structural lumber, fine quality finishing materials, pulp and paper, plywood, violins, pianos and aircraft parts.

Engelmann Spruce (Picea engelmannii) is the most widespread spruce in America and an important forest tree. Named after nineteenth-century German-born physician and botanist George Engelmann, this spruce is native to western North America from central British Columbia and southwest Alberta, and southwest to northern California.

Engelmann Spruce hybridizes by interbreeding with the closely related White Spruce in certain areas and to a lesser extent with the closely related Sitka Spruce where they meet on the western fringes of the Cascades. Trees begin seed production after about 20 years, creating the small black-winged nuts in moderate numbers that are dispersed by wind.

Engelmann saplings cannot tolerate full shade or dry sunny spots and are known to re-colonize burned areas. A straight, spire-like evergreen of medium-size, it can grow up to 50 meters (160 feet) high and 1.5 meters (5 feet) in diameter. The bark usually forms in thin scales of pale gray but can also turn a reddish -or orange-brown. This wood is a uniform white and has a pleasing knot pattern.

Other common species of spruce include: Sitka Spruce, White Spruce and Black Spruce. Pine is commonly used as structural lumber and in general construction of wood framed houses. Lodgepole Pine and Western White Pine range in color from cream to yellow to pale reddish-brown. Non-porous with a fine, uniform texture, their wood is straight-grained, light in weight and of moderate to medium strength and hardness.

The wood should be treated first if used in surroundings that encourage decay. Seasoned wood dries rapidly with small dimensional movement and little tendency to check. Either species is reasonably easy to work with and has good machining qualities plus the capacity to turn, plane and shape well. Both can be sanded to a smooth finish, accept glue without difficulty and have moderate nail and screw holding ability. Lodgepole Pine and Western White Pine are widely available softwoods and are used in general framing for construction, interior paneling, shelving, millwork, door and window components, veneer, plywood, treated fence posts and treated railway ties. Of the five western species of pine in British Columbia, Lodgepole Pine (Pinus contorts) and Western White Pine (Pinus monticola) are the two most commercially important and widely distributed throughout Canada.

Lodgepole Pine is also known as Black Pine, Scrub Pine, Shore Pine and Coast Pine. It is found over most of British Columbia, the southern part of the Yukon, and on the eastern slopes and foothills of Alberta’s Rocky Mountains. This evergreen is the most widespread tree in the province and can grow 30 to 40 meters (90 to 130 feet) tall but often grows much smaller. Bark characteristics are thin, scaly and an orangey-brown to grey.

Lodgepole Pine is susceptible to mountain pine beetle attacks, mistletoe, rusts, and root rot, yet this species is the first to grow back after the land has been disturbed by fire or logging.

Western White Pine grows in the southern coastal area of BC, including Vancouver Island and in the wet belts of the southern interior. Also known as Silver Pine, this tree gets its name from the wood’s light color and can grow up to 60 meters (190 feet) in height but normally only reaches 30 to 50 meters (90 to 160 feet).

The bark is thin, smooth, grayish-green when young, turning dark with deep vertical grooves and small rectangular scaly plates when mature. Western White Pine is extremely susceptible to white pine blister rust which is fatal to the tree. Some popular uses for this wood are carving, furniture making and pattern making. 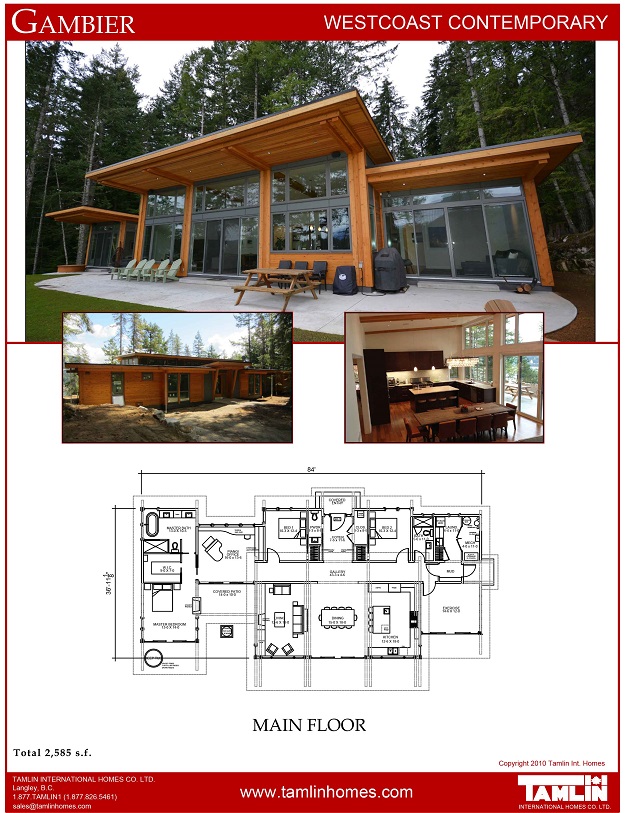 You'll also get occasional updates and photos by email from Tamlin Homes International.

You have Successfully Subscribed!

Tamlin will not spam you or share your email address.

One USA Welcome Package
Delivered to Your Inbox

Get our USA Welcome Package delivered immediately to your email inbox.

We'll also notify you of our monthly specials and share occasional project updates. Unsubscribe at any time.

**We hate spam too! We'll never share your email address.

One Welcome Package
Delivered to Your Inbox

Get our Welcome Package delivered immediately to your email inbox.

We'll also notify you of our monthly specials and share occasional project updates. Unsubscribe at any time.

**We hate spam too! We'll never share your email address. All Our House Plans
In One ConvenientBook

Get our House Plan Book delivered immediately to your email inbox.

We'll also notify you of our monthly specials and share occasional project updates.

**We hate spam too! We'll never share your email address. Unsubscribe at any time.

**We hate spam too! We'll never share your email address. Unsubscribe at any time.